My name is Roger Clark, I started CGK Boer Goats for my nieces. It all started as a simple 4-H project that is slowly growing. My oldest niece Taylor got her first pig in 2007 for her first year in 4-H. While at the fair she spent more time in the goat barn then with her pig so the next year I got her a pig and a goat. That was the last year for pigs she just loved her goats more. In December of 2009 I decided that since Taylor and her younger sister Kerigan liked goats and were both going to show goats in 2008 I would go out and buy 2 bred does so they could see the kids from just born all the way to market as a learning experience. I never planned on breeding them again it was a one time deal. We sold out of our show goats in 2012 and now just have a few does for a hobby. I will list kids for sale when we have them. The kids will be born December-March, I try to have January kids but if you miss a heat cycle or two then that will push things out later. I will say I do not dehorn my goats even the wethers. 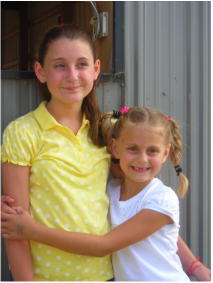 We live in northeastern Indiana, just north of Fort Wayne on the northern border of Huntertown. It is a nice small town but not far away from the city. We have 8 acres. We have found that having goats and cattle work really well. The goats are browsers so they don't eat a lot of grass. They would rather eat the thistles, wild rose bushes along the fence, or leaves off the trees. Once they finish what they like in a field then the cattle get all the grass. The goats have really helped keep the fence rows clean for the most part.